The teleconference of the extraordinary International Meeting of Communist and Workers’ Parties (IMCWP) took place on 10–11 December 2021, under the theme “The international economic, political, and military developments. The experience from the struggle of Communist and Workers’ Parties and the peoples. Solidarity with Cuba, the Palestinian people, and all the peoples struggling against sanctions, machinations, and imperialist aggression”.

END_OF_DOCUMENT_TOKEN_TO_BE_REPLACED

Workers have a world to win – and a planet to save!

Speaker after speaker at the COP26 conference in Glasgow pointed to the increasing frequency and severity of the effects of climate change, from droughts to hurricanes to floods to forest fires. These effects are devastating the developing countries of the global south, but they are also wreaking havoc in imperialist countries, as evidenced by the recent mass floods and mudslides in BC.

Yet despite the abundant evidence of crisis, the Glasgow conference was a festival of platitudes rather than a serious discussion of solutions.

END_OF_DOCUMENT_TOKEN_TO_BE_REPLACED

The Communist Party of Canada denounces the declaration by Minister of Foreign Affairs Mélanie Joly, that “Nicaragua’s November 7 elections do not reflect the will of the Nicaraguan people.” Likewise, we demand an end to all sanctions against this Central American country. Canada increased its sanctions on November 15 with the clear aim of demonizing the democratically elected Sandinista (FSLN) government.

END_OF_DOCUMENT_TOKEN_TO_BE_REPLACED

Twenty-two thousand workers in ten CUPE Locals are fighting the Tory government of hard-right Premier Blaine Higgs in New Brunswick.  Workers in education, transportation, municipal services, universities, social services, nursing homes, corrections, and healthcare workers deemed non-essential, have been on the picket lines since October 29th.  One of the issues in the strike is pensions, the government’s unilateral decision to stop funding the “Public Service Pension Plan” 5 years ago, and its current efforts to force the two union locals that haven’t agreed to opt-in to the shared-risk pension plan that replaced it, to do so.

END_OF_DOCUMENT_TOKEN_TO_BE_REPLACED

The Communist Party of Canada condemns the traitorous actions of the Sudanese military which overthrew the civilian government it was a partner in, in a coup d’etat on October 25th.

The hopes of the Sudanese people for a peaceful path to national sovereignty and independence, to peace, progress and social and economic advance via this alliance of civilian and military forces, have been blown apart.

Arrests, killings, and worse of Sudan’s Communists and democrats are the military’s legacy.   They are a force for the continuation of Sudan’s domination and exploitation by the EU and US imperialism.  The Sudanese people must be free to determine their own economic and social path forward.

END_OF_DOCUMENT_TOKEN_TO_BE_REPLACED

The sudden withdrawal of extradition proceedings against Meng Wanzhou, her release from house arrest in Vancouver, and her subsequent return to her home, family and work in China marks a final end to this embarrassing, unjustified and totally unnecessary episode in Canada-China relations and Canadian foreign policy in general. After more than 1,000 days in detention, her release is an important victory for Ms. Meng herself, for the Chinese government and people, and for all those across Canada and around the world who denounced, organized and stood by her side throughout this sorry ordeal.

END_OF_DOCUMENT_TOKEN_TO_BE_REPLACED

The National Day of Truth and Reconciliation (“Orange Shirt Day”) on September 30 is an important occasion for all who live in Canada to pay a solemn tribute to the victims and survivors of the so-called “residential school system,” which was an instrument to further the assimilationist and genocidal agenda imposed against Indigenous peoples. 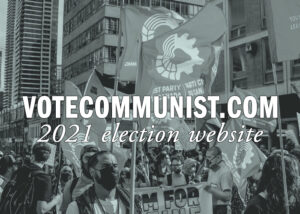 Our Party in Action

Photos of comrades out for #mayday in Montreal, To

To move forward and make real gains, the labour mo

NO TO WAR! De-escalate for peace in Ukraine and to