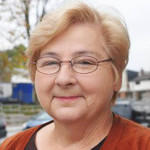 Liz Rowley was elected to the position by the CPC’s Central Committee in 2016.

Liz Rowley is well-known across Canada for her many years of activity in the Communist Party and in a wide range of people’s movements. Born in British Columbia in 1949, she joined the CPC in 1967. As a student at the University of Alberta, she was the Party’s youngest candidate in the 1972 federal election, speaking out strongly for women’s reproductive rights and an end to the Vietnam War while running in the riding of Edmonton Strathcona.

She has been a Party organizer in Ontario since 1973, apprenticing as a typesetter in Windsor before becoming Provincial Organizer in 1975, International Women’s Year. She has been a member of the Central Executive Committee since 1978. Living in Hamilton during the 1980s, she was deeply involved in many labour struggles to defend jobs, living standards, labour rights, women’s equality, social programs and Canadian sovereignty. While campaigning to ban the Ku Klux Klan, Rowley’s apartment was destroyed by arson. During the 125 day long Stelco strike in 1981 she married a steelworker. She is now the proud mother of two adult children.

Moving to Toronto after being elected as Ontario leader of the Party in 1988, Rowley became a powerful grassroots spokesperson in the “Days of Action” fightback against brutal cutbacks imposed by the Mike Harris Tories, and was elected a Public School Trustee in East York. She has been an outspoken participant in many battles for the rights and interests of working people in Ontario, around such issues as defence of public education, for public auto insurance, the fight against plant closures, for peace and anti-racism, proportional representation, and much more. Along with Miguel Figueroa, she was instrumental in the membership struggle to block attempts to dissolve the CPC during the early 1990s.

Born in Montreal in 1952, Miguel Figueroa joined the CPC in 1977 a national field organizer for National Union of Students. In 1978, he became the party’s Greater Vancouver organizer, and from 1986 to 1992 he was the Party’s Atlantic region leader. Starting in the late 1980s, he and Rowley were key figures in the struggle to save the CPC. At the Party’s 30th Central Convention in December 1992, Figueroa was elected as its new leader. Over the last 23 years, Miguel Figueroa led the Communist Party through the landmark Figueroa case, eight federal election campaigns, and speaking across the country. He was also a prominent figure at the annual International Meeting of Communist and Workers’ Parties, representing the CPC many times.

The 38th Central Convention of the CPC will be held May 21-23 in Toronto. The Convention will feature a tribute to Miguel Figueroa as a highlight of the weekend’s agenda.

Over the coming months, Liz Rowley will meet with CPC members and supporters across the country. She will also speak at a series of public forums and events as party of the CPC’s campaign to block ratification of the Trans-Pacific Partnership (TPP), the 12-country corporate pact signed by Canada last week in Auckland, New Zealand.

For more information, or to arrange an interview with Liz Rowley, contact the Communist Party’s central office, 416-469-2446.