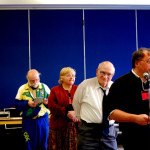 In accordance with Article 7, Section 2 of the Constitution, the Central Committee hereby issues this Call to the 38th Convention, to be held May 21-23, 2016 in Toronto. The Convention shall commence its work Saturday, May 21, at 9:30 am, at the convention hall. Registration shall be open at 8:30 am Saturday morning.

Registration shall commence Friday May 20, 6-8 pm, at 290 Danforth Ave. Billets and childcare arrangements can be picked up at this time as well as on Saturay morning at the Convention.

The main work of the 378h Convention is to adopt the main Political Resolution, a Plan of Work, consider amendments to the Party Constitution, elect the incoming Central Committee, Audit and Appeals Committees, and ratify a new Executive Committee and Party leader.

Provincial Committees and the National Committee in Quebec shall be advised of the number of Delegates and Alternates to be elected in each province and in Quebec not later than Monday, March 21, 2016.

Members of the outgoing Central Committee, Audit Committee and Appeals Committee, who are not Delegates, will be seated at the Convention with voice, but not vote.

Delegates and Alternates from Quebec shall be elected by secret ballot at a Nominating Convention of the PCQ.

Alternates shall be elected on a separate ballot, following the election of Delegates.

The Nominating Conventions shall be held on selected weekends between Saturday April 16th and Sunday, May 8th, to be determined by the Committees concerned in consultation with the Central

Those amendments or resolutions receiving the support of a Nominating Convention, together with all other amendments and resolutions, shall be forwarded (by mail or email) to the Central Conventions Committee by midnight PDT, Monday, May 9, 2016.

Any member in good standing, Party Club, or elected Party Committee, may submit an amendment or resolution directly to the Central Convention, however members are strongly encouraged to place amendments before the Nominating Convention.

Nominating Conventions shall also consider nominations to the Central Committee, Central Executive, Audit and Appeals Committees, and Party leader, and shall express their collective opinion in a secret-ballot vote. In accordance with Article 7, Section 6, delegates shall give due regard to each candidate’s leadership qualities, links with the working class and democratic forces; the multi-national character of Canada; area representation; balance of experienced comrades and the timely promotion of younger comrades, and take into account the systematic advancement of women, persons with disabilities, Aboriginal People, People of Colour, and lesbian, gay, bisexual and trans persons.

Those nominations receiving the support of a Nominating Convention, together with all other nominations, shall be forwarded to the Central Convention Nominations Committee by midnight PDT, Monday, May 9, 2016.

Size and Composition of the Incoming Central Committee

Eligibility for Nomination and Election

As set out in Article 7, Section 3, to be eligible for election as a delegate or alternate to the Central Convention, one shall have been a member in continuous good standing for at least one (1) year.

As set out in Article 7, Section 6, to be eligible for election as a member or alternate to the Central Committee, one shall have been a member in continuous good standing for at least two (2) years.

As set out in Article 9, Section 9, to be eligible for election to the Central Appeals Committee, one shall have been a member in continuous good standing for not less than five (5) years.

As set out in Article 10, Section 2, to be eligible for election to the Central Audit Committee, one shall have been a member in continuous good standing for not less than five (5) years, shall not be a member of the Central Committee or be on the payroll of the Party, and shall be within access of the city in which the central headquarters is located.

Convention Fees are $50.00 for Delegates and $25.00 for Alternates, and shall be paid by the Provincial or Regional Committee in the province, which elected them, and by the PCQ in Quebec.

The Centre will pay transportation costs of accredited delegates. Airline tickets will be purchased centrally by the Convention Committee in consultation with each delegate. Airline flights must be booked as soon as possible after delegates are elected to keep costs down. Delegates from Ontario and Quebec are asked to carpool, with extra seats going to alternates as a priority.

The Convention is open and accessible to all members, and the Central Committee invites all of our members and friends to attend the 37th Convention.

Requests for billets and childcare should be submitted to the Convention Committee by Monday, May 9th or earlier, on the forms attached.

Requests for assistance with special needs of any kind should also be submitted to the Convention Committee by Monday May 9th or earlier.

The Convention facilities are wheelchair accessible.

The Discussion Bulletin will be distributed to all members of the Party, through the clubs, or in the case of members at large, through the appropriate Provincial or Regional Committees. Club Executives are asked to organize special meetings of each club during the pre-convention period to ensure energetic theoretical and political discussion of the Political Resolution and other materials before the Convention. Clubs as well as individuals, should develop their thinking on key questions, and express their views in the Discussion Bulletin so that all members and clubs can respond and comment.

Comrades, the 38th Convention takes place on the heels of a federal election campaign that drove the Harper from office after almost a decade of Tory austerity, war and reaction. The single-minded determination of working people from coast to coast to coast to rid Canada of this far right government has now shifted to focus on the new Liberal government to deliver on its promises of “real change now”, including job creation and improved living standards, protection of Medicare, restoration of social, civil and equality rights, electoral reform, opening the doors to 25,000 refugees, and withdrawing Canadian fighter jets from Syria, and a slew of other election promises.

But these will be empty promises until working people organize on an all-Canada basis to compel the government to deliver, or to stand down and make way for a new government that will deliver the real and fundamental change that is so urgently needed in Canada today. Moving from the defensive to the offensive, by moving working people into the streets in mass independent political actions led by labour and its social allies, struggling for new policies, new government, and a new direction leading to socialism is what we seek.

To achieve this requires a bigger, stronger and more influential Communist Party, Young Communist League, and communist press. This is the decisive question.