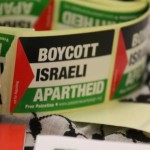 At the recent 17th International Meeting of Communist & Workers’ Parties held in Istanbul, the Communist Party of Canada delegation prepared a special resolution (below) to garner international support for the campaign for boycotts, divestment and sanctions against Israel. Four other parties were approached to co-sponsor the resolution (CPs of Britain, Ireland, Lebanon and South Africa), and all agreed to do so. To date, 43 parties have endorsed the resolution. This initiative reflects our party’s commitment to increasing international pressure on the Zionist state, and our solidarity with the Palestinian people.

Support for Boycotts, Divestment and Sanctions against Israel

We the undersigned parties attending the 17th Meeting of Communist & Workers’ Parties (Istanbul, October 30 – November 1, 2015) agree to support and actively promote the international movement for boycotts, disinvestment and sanctions against Israel until such time as it ceases its violations of the basic human rights of the Palestinian people.

Palestinians have suffered for generations in camps and Israeli prisons, facing torture and death, and Israeli bombings of their schools and homes. Today they are being walled off from the water in their deep aquifers, from access to Jerusalem, from fishing and farming. Gaza is treated as a prison by the Israelis and the rest of Palestine is colonized, and partitioned into townships.

This campaign – which includes consumer boycotts of Israeli goods and services, divestment, and economic sanctions against Israel – is a non-violent form of political action that has had effect in the past (for example against Apartheid South Africa) and is beginning to show its effect on the Israeli economy.

The naming of an Israeli Cabinet Minister to an anti-BDS portfolio indicates that the Zionist Netanyahu government is fearful that this movement will grow. The active involvement of our parties in this campaign can contribute to international coordination and help build the broad front in solidarity with the Palestinian people in their struggles for justice and self-determination.