As the crisis becomes more and more imminent, the Communist Party of Canada opposes any attempt to intervene in Haiti and calls on all political, trade union and democratic organizations to show their solidarity with the Haitian people by defending the sovereignty and the integrity of this Caribbean country.

END_OF_DOCUMENT_TOKEN_TO_BE_REPLACED

Yesterday Ontario education workers, members of CUPE, declared victory as the Ontario government agreed to rescind its strike-breaking Bill 28 and the invocation of the Constitution’s Notwithstanding Clause, which was the legal basis for the Bill. Bill 28 eliminated the union’s free collective bargaining rights, imposed the government’s final offer on the union, eliminated the union’s right to strike, and set a precedent for strike-breaking legislation that could be replicated across Canada.

END_OF_DOCUMENT_TOKEN_TO_BE_REPLACED

The Constitution’s Notwithstanding Clause was a sop to provincial governments in western Canada opposed to the Constitutional recognition of a strong federal government with power and authority greater than that of the provinces and territories over such things as the implementation of a national energy policy and equalization payments, to sign on to the new Constitution in 1982. The clause gave the provinces the power to override the Constitution, including the Charter of Rights and Freedoms. It also isolated Quebec which refused to support the new Constitution because Quebec’s status as a nation within Canada, and its right to national self-determination up to and including its right to secession, was denied. Indigenous rights and the rights of Acadians were also denied.

END_OF_DOCUMENT_TOKEN_TO_BE_REPLACED

Canada’s collapsing public healthcare repeatedly made cross-Canada news media during the summer of 2022 as emergency rooms closed and exhausted healthcare workers told the public that the system was stretched to the limit. Across the country there are record job vacancies for healthcare workers, record wait times for hospital beds and surgeries and more and more lives are being lost as corners are cut and health services become increasingly inaccessible.

END_OF_DOCUMENT_TOKEN_TO_BE_REPLACED

The recent October 3 election in Quebec is a reminder of the importance of reforming the current voting system. In recent years, rarely has the distortion between the popular vote and the seats obtained, induced by the first-past-the-post system, been so obvious.

With 41% of the vote, the CAQ won 72% of the seats, while the Liberal Party, the fourth party in the popular vote (behind Québec solidaire and the Parti québécois), was the official opposition. Similarly, Éric Duhaime’s Conservative Party failed to win any seats despite the support of 13% of voters.

END_OF_DOCUMENT_TOKEN_TO_BE_REPLACED

The Central Committee of the Communist Party of Canada extends solidarity to the working class of Brazil and their allies in their struggle to take federal state power away from the most reactionary elements of the ruling class.

The reactionary movement in Brazil with their support from the Canadian state and big business have murdered and attacked trade unionists, environmentalists and indigenous peoples.  During the campaign they have assaulted politicians, especially Afro-Brazilians, women, and LGBT+ people.

END_OF_DOCUMENT_TOKEN_TO_BE_REPLACED

In response to a call-out from the Canada-wide Peace & Justice Network and the United National Anti-War Coalition (UNAC) in the United States, more than a dozen rallies, pickets, and seminars are taking place this week (October 15-23) in nine cities across the country.

The unifying theme of these actions is to denounce the rising tide of militarization and war around the world, to bring public action to the increasing risk of direct confrontation between the major powers and the unthinkable possibility of a thermonuclear war, with all the consequences that will entail for the future of humanity.

END_OF_DOCUMENT_TOKEN_TO_BE_REPLACED

The Public Order Emergency Commission has begun public hearings into the declaration of emergency powers last winter. Subsequent events and revelations have strengthened the argument raised by the Communist Party of Canada at the time: that the dangerous growth of fascist forces called for immediate action to protect and strengthen democratic and civil rights, using existing laws, to protect the public and disperse illegal occupations, but not to eliminate these rights altogether. 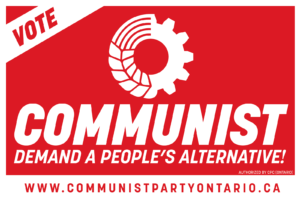 Our Party in Action

Today is the sixth anniversary of the death of Fid

One hundred and five years ago today, the revoluti

Solidarity with the working class in Brazil! Down

Demand a negotiated political solution to the war