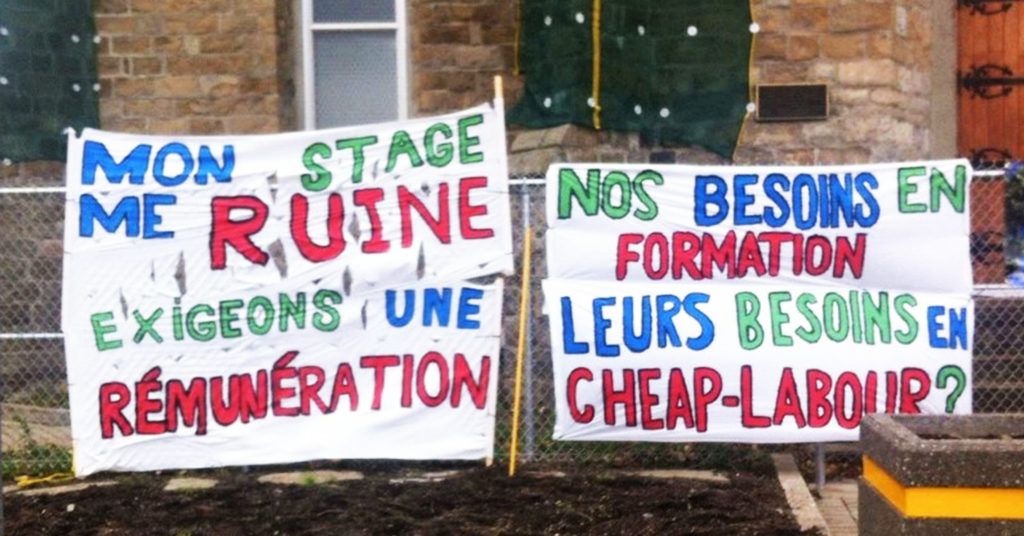 The Central Committee of the Communist Party of Canada extends its solidarity to the nearly 60,000 students who are on strike this week of November 19-23 to win compensation for all internships. The strike affects several universities and CEGEP across Quebec. Some institutions, including the CEGEP du Vieux Montréal, has suspended classes while thousands of demonstrators picketed.

At the heart of this movement is the demand for compensation for all work placements at all levels. In Canada, there are approximately 300,000 internships (55,000 in Quebec) each year for students to complete their degrees. Unpaid internships are concentrated programs whose enrollment is predominantly female (teaching, social work, nursing, etc.), which severely undermines the possibility of reconciling work, study and family.

We denounce the situation of the growing precariousness of students. For example, the average student debt is about $30,000, which means that students have to borrow more and more to complete their post-secondary education. It is these same students who are asked to work without pay for longer and longer periods. In fact, over the past 20 years, the number and length of required internships have grown at an alarming rate, which is the result of the drive for state disengagement from education.

The use of this practice makes it possible to transfer part of training to the workplace where the trainees become free labor, instead of investing in new classrooms and more teachers.

As Communists, we believe that all work deserves a wage, regardless of whether the employee is in training or not. From the moment a person participates in the productive process, they must be paid for their work. Therefore, it is required that all trainees be paid at least the minimum wage (which we demand to be at a livable level of $20 per hour) and that their working conditions are equal to those of other employees. We also demand the end of the “coffee machine” internships. Too many trainees spend most of their learning in the workplace doing the “dirty work” instead of expanding their knowledge and assimilating the qualities required in their area of ​​training.

The demand of compensation for internships is in line with the fight for free education. We demand that no student have to pay anything to study, which includes not only the abolition of all tuition fees and related fees, but also the removal of all financial barriers that restrict access to studies. This is why we also demand the implementation of a student living allowance.

We also denounce the hypocrisy of the Quebec and Canadian governments. While the previous Couillard government set some limits on the use of unpaid internships, it remains that these measures are largely insufficient and do not ensure remuneration for internships. Only the compulsory final internships for teachers (the fourth) are now paid. For the rest of the interns, the funding is designated for 4000 students and the funds are in fact scholarships rather than real compensation that would come from the employer. The new Minister of Education is only commissioning research to investigate if certain internships need to be paid. This hypocrisy is all the more blatant as the Quebec state is one of the major employers using unpaid interns.

The strong mobilization generated by the movement for the end of unpaid internships seems to indicate that the Quebec student movement is getting its momentum back. However, while the question of an unlimited general strike in February 2019 is being raised, it is disturbing to note that the two largest student federations in Quebec are not involved in the fight and prefer to negotiate with the minister on the issue. This situation is similar in many respects to the one prevailing in 2008 when the strike movement failed, despite a strong mobilization at the grassroots level, when the Student Federations (FECQ and FEUQ) negotiated separately with the government while ASSÉ found itself alone in the street.

The success of the intern strike is based both on the consistent work of several activists for two years, and also on an appetite on the part of students towards mobilization. This grassroots mobilization is essential to strengthening the student movement in Quebec, which has been in regroupment for at least three years. However, to broaden the fight to include unions and other progressive groups, to build on this mobilization for the long term and to ensure that the student movement is at the heart of the fight against the Legault government’s anti-popular measures, the effort to build a united and militant student movement is crucial.